Two guys in a smoky room 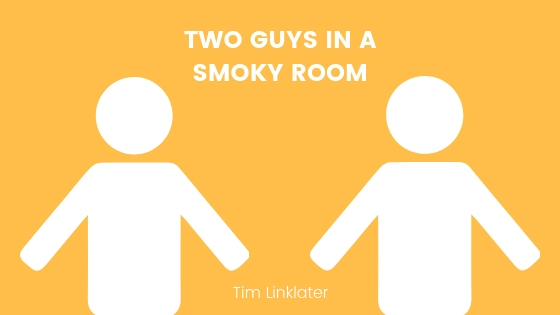 There are two guys sitting in a smoky room, playing cards.  One of them is coughing, one of them isn’t.  Now there’s two ways to approach the scenario here.  In some instances, modern thinking has evolved to the point of seeing the guy coughing as having a problem.  He must be sick.  Alternatively, the guy who’s not coughing must be fine right, his body isn’t showing any signs of problem with the smoke?  He must be the healthy one.

The guy who’s coughing though, there must be a problem.  Why is he coughing when the person sitting just next to him isn’t?  There must be something wrong.  His system is obviously having trouble dealing with the smoke and the cough needs to be looked after, more than likely with some sort of cough suppressant medication.

Society as a whole has evolved to the point of thinking all symptoms present in the body are diseases which need to be suppressed, rather than potential warning signs that need to be heeded and acted upon.  A person throwing up after eating bad food is seen as sick, and medication to suppress the vomiting is used in most instances.  Now whilst an unpleasant thing, I’d be fairly happy if my body has identified food poisoning so quickly and is able to eradicate it so efficiently.  I’d go as far as to say that throwing up is a healthy response.

Back to the two guys in a smoky room.  Chiropractic would be more inclined to believe that the body of the guy coughing is adapting well to his environment.  Hence, it’s working appropriately given the situation.  See his body has come into contact with a potentially harmful substance and is working hard at expelling it from his body.  The body of the guy not coughing however could be compromised.  It doesn’t seem to be able to detect or counteract its contact with the smoke.

When it comes to health, Chiropractic doesn’t wait for symptoms to appear/disappear.  We choose to be more proactive.  With most diseases and pathologies, symptoms are the last thing to show up and often the first to leave.  Symptoms are simply viewed as a means of showing us that change is taking place is the body, not necessarily in which direction.  Sore from a workout after the gym?  Good, it means you’re alive and your body’s adapting to the taxing workout, not that you need to take something to feel nothing.

Chiropractic chooses to allow the Intelligence of the body to deal with such instances.  After all, it created your entire body, arms, legs, heart, kidneys, lungs, immune system, all from two tiny cells and no instruction booklet.  Society on the other hand is still having trouble dealing with another system update on our iPhones.

You’re more than welcome to choose which way you see it, Chiropractic is here for you regardless.